On Wednesday 15th of June, Year 6 went on a trip to the Kinma School for ‘Friendship Day’. 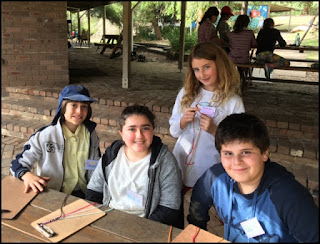 Our secretary, Mrs Boyadjian, took us to the Kinma School. There were a lot of students from different schools there. Some of the teachers and students introduced themselves and showed us around the school. They also told us where to sign in and put our bags.

After signing in they told us that we had to write our name on a piece of paper then fold it up and put it in a bowl. Then we put our bags in the hall and started to play.

A while later they called us into the hall. In the hall there were speeches and we were told why we were at their school and how ‘Friendship Day’ started. 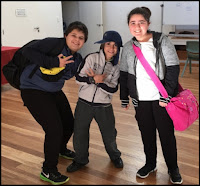 After their speeches they told us to get into a circle. This is when they got the bowl out with all our names folded in it. Everybody had to pick out a name, but if it was someone from your school or someone you knew then you had to put it back and pick out a different one. 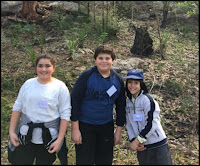 Then it was question time. This was when some students from the Kinma School asked each of the schools some questions.

After all of the questions were asked it was time for morning tea. For morning tea we had veggies with dip, fruit and sweets. It was very yummy!!! We then played for about 10 minutes.

When morning tea ended, it was time for a bushwalk. On the bushwalk we went past the stream. On the bushwalk there was clay on the ground and we got to hold it and mould it.  There was an Aboriginal rock which was shaped like a boat, and this rock was used as a Birthing place by the Aboriginal people. At the end of the bushwalk they gave us a small box to put our clay in.

After we washed our hands and put our boxes full of clay near our bags, then it was time for lunch. For lunch we had spaghetti Bolognese. It was really yummy too!!! When we finished our food we were able to play. We played for a long time. 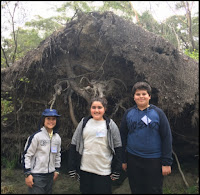 When it was time to go, everyone got their bags and clay creations. We waited at the basketball court to be picked up.

When we got to school we told our class what we did there and we also taught them how to make two different types of friendship bracelets.

So that is the end of our trip to the Kinma school.

Many physiological studies have shown that the brains of bilingual people operate differently to single language speakers, and in fact that learning a second language is a great asset to the cognitive process. Experts say, that children who learn a second language beginning in early childhood can benefit from increased critical thinking skills, memory and flexibility of the mind. 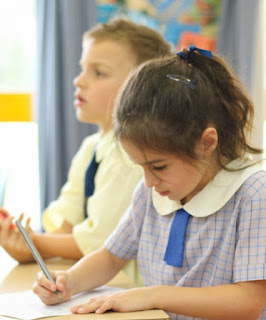 University of Queensland bilingual education expert Dr Simone Smala says other benefits of bilingualism include a slower mental decline, a better appreciation of other cultures and increased job prospects. However, despite the benefits, the proportion of students in Australia studying a second language is low compared with other countries. While the government has tried to push and encourage the learning of languages up to the senior years of high school, unfortunately speaking a second language is a skill that isn’t valued by the majority of Australians.

We do know that children who learn languages early have a lot of advantages. For example, there’s an interdependent relationship with English literacy development for children who learn languages early. There is also a greater meta-linguistic awareness, which basically just means the engagement with a second language makes even very young children a lot more aware of language, of its different roles, the structure of sentences and so on.

We also find that there is an increased mental processing capacity through the engagement with a second language, which leads to a better memory and better control over information processing. For example, children become better at ignoring not so important facts and focusing on the important things.

In general, there are many advantages to being bilingual. One interesting benefit, based on many research studies, is that knowing a second language can slow down mental decline later in life. We can also see long term benefits in the way that it’s easier to learn more languages if you have learned a second one early in life. Knowing a second language also instils a general appreciation of other cultures and better intercultural understanding.

What we are starting to see now is that most industrialised nations are training their citizens well in English, so their citizens become fully bilingual. Monolingual English speakers might soon be the only monolingual speakers in the world and might be competing for jobs with people who can speak English as a second language well, but also have another language.

BRIGHTER FUTURE IN OUR ‘YEAR OF GROWTH’ 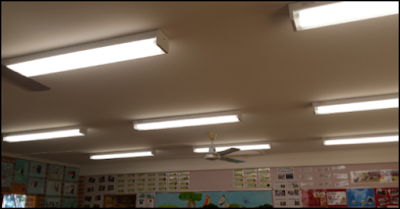 In our ‘Year of Growth’, we are moving towards a much ‘brighter’ future thanks to the installation of new lights throughout the school! For over 25 years the florescent lights in the classrooms and administration building have been serving our needs, but over the last few years they have been a cause for concern, as they were starting to become a maintenance and safety issue. The old plastic on these florescent units were at times so brittle that they fell apart during routine maintenance. Some of the units were not working at all, not to mention the fact that they were not even switched on at most times, to simply avoid the constant buzzing annoyance and sound coming out of them.

Thanks to the support and foresight of the School Board the issue was resolved and a plan of action was put in place for this major and costly capital project. The issue was not a simple replacement of the lighting units, but a plan for the future with a more robust, modern and environmentally friendly system that will serve the needs of the school well into the future. Therefore, the solution to replace 106 light fittings required careful research and planning. Once again, it was one of our graduates who came in to assist and ‘serve’ the school they graduated from in the year 2000. Our graduate of the new millennium, Garen Manoukian, the owner and proprietor of ‘Impedanz Electrical’, recommended the installation of the latest LED light tubes that not only use 50% less energy than the florescent equivalent but also last much longer with potentially zero maintenance. The fittings are also placed in a full metal chassis with screws in the end caps, making them much safer and robust.
The new lights have now been installed in two classrooms that were affected the most. The Board has also used this opportunity to apply a new and fresh coat of ceiling paint, which was done during the holiday period. The rest of the lights will be installed during the next term break. The ceilings will also be painted in the process, allowing our students to be invited into a much brighter, safer and environmentally friendly classrooms.

On behalf of the students and teachers, I like to take this opportunity and thank all Board members for their support. It is gratifying to know that we have members who are not willing to compromise the safety and wellbeing of our students and staff at any cost. For this, we also like to acknowledge our business partners and sponsors who continue to support the school. Without their financial input it would not be possible to implement these type of capital projects, which in this case is anticipated to be over $11,000.