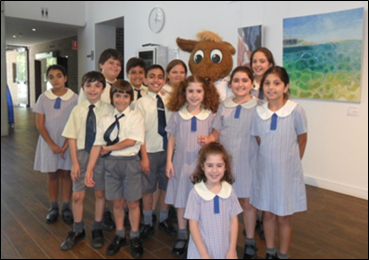 On the 9/3/15 Years 4, 5 and 6 went to the Glen Street theatre to watch the Duffys Forest Defenders.
The transportation that we used to go there was a minibus. When we arrived we sat outside waiting for them to call us in. Eventually they called us in and we were the first to go in. We sat at the second from the front. Leonie was the lecturer who called out her friend Billie the Bandicoot. When Billie was walking backstage he shook his bottom and everybody laughed. Then Leonie presented the mayor of Warringah to speak to the audience. When he finished his speech Leonie presented one of the defenders of Warringah, a ranger named Anthony.
Anthony showed us a baby ringtail possum, and everyone thought it was cute. He rescued the possum because his mother had died.  Anthony brought out a diamond python. He called up some students to touch it, and one of those students was Nina. He told us an interesting story about a diamond python that lived in his ceiling. It shed its skin and when Anthony was going to sleep he heard a screaming noise. So he got his flashlight and looked in his ceiling and then he saw a diamond python squeezing a rat, and then his eyeballs popped out and he thought that the rat must have been screaming. 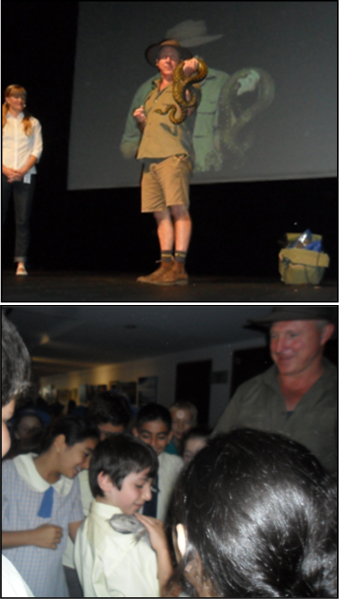 The ranger brought two lizards on to the stage. One was a blue tongue lizard and the other was a water dragon the lizards were running all over him. He said don’t hold a lizard by its tail because then their tail would fall off.  Anthony brought out a goanna. He said you might have seen one in your backyard or at school. Anthony showed us a baby fruit bat. He got the baby fruit bat because his mother died, it got caught in the electric wires. He said the bat thought he was his mother because he gave him milk from a bottle.
The ranger showed a long neck turtle. When he was bringing it out its whole body was in its shell, he was small. Anthony said he’s a speedy fellow so he put the turtle on the floor and it started running. The turtle was fast. Anthony brought out a tawny frogmouth. It looked like a piece of bark. It was well camouflaged on a branch. Everyone thought it was an owl but it wasn’t. Owls have round shaped faces.
The last thing that Anthony brought out was a bearded dragon it crawled all over him just like the other lizards. After that he said that he would bring the bearded dragon out and we could pat it. When it was our schools turn we patted it and then I told Anthony that it was my birthday then he put the bearded dragon on my shoulder. Then we headed home.

On the ninth of March in 2015 we went to the show Duffys Forest Defenders. We went to the Glen Street theatre to learn about Duffys Forrest and why it is important. We learned about the flora and fauna of Duffys Forest. We went to a lecture and the lecturer was Leonie. There were many different schools that were also participating in this great show. When we got in to the theatre, the mayor of Warringah introduced the show. After that Billy the bandicoot came on stage to say hello to all the students. 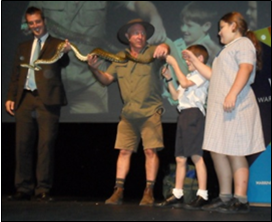 Anthony is a ranger and he showed us all kinds of animals. First we saw a baby ringtail possum that was in a cage that was covered in leaves. Blossom was a nocturnal animal that’s why we had to be very quiet so that Blossom the possum didn’t wake up. Then we saw a python and Nina got the opportunity to go on the stage and hold the python with another boy.
After that we got to see a water dragon and a blue tongue lizard. Blue tongue lizards have blue tongues so that their tongue is protected against hot things. After that Anthony brought out a big goanna and let it walk on the stage. We got to see a long neck turtle after the goanna and it had a very long neck, we also got to see it run around the stage. You would think that it would go slowly but it went very fast. He brought out a tawny frogmouth and it looked like an owl, but owls have a more circular face. We saw a bearded dragon in the foyer and because it was Kevork’s birthday he got to hold it on his shoulder. The Responsible Pet Ownership Education Program visited the school on Wednesday 11 March. A Pet Educator and their dog attended our school to facilitate education sessions on all facets of responsible pet ownership, safety around animals and minimising the risks from dog bites/attacks. The program helped to teach how to be safe around dogs and how to say ‘hello’ to a dog with their owners!
Primary age children remain highly over represented in the dog bite/attack statistics. Ongoing education of children and their families in relation to living safely with dogs is vitally important, if we are to continue to reduce the number of dog attacks in the home and community. 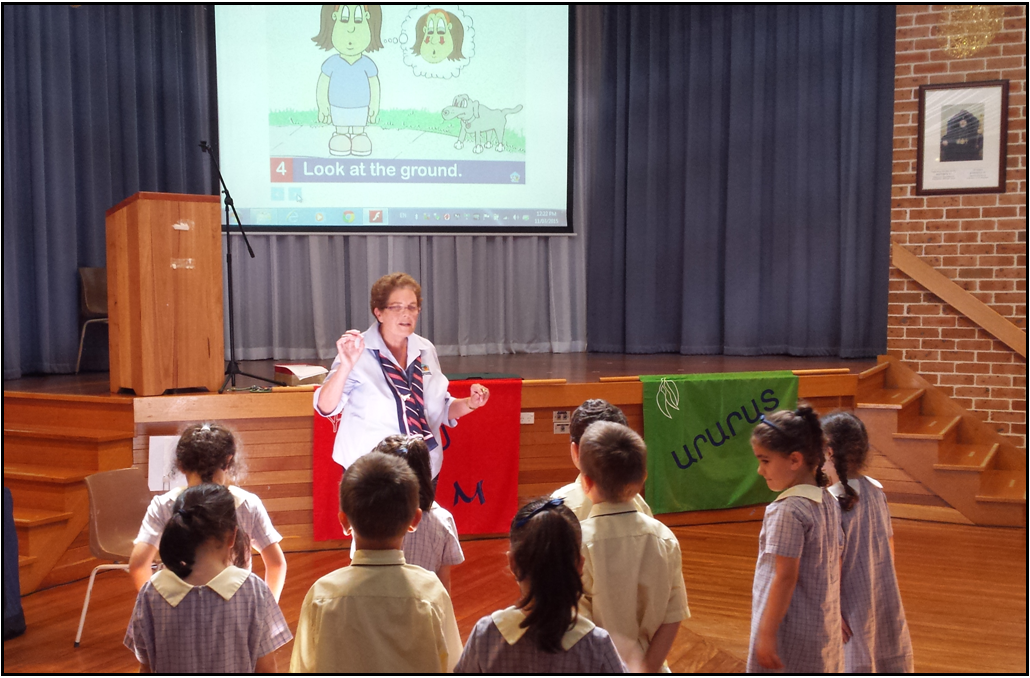 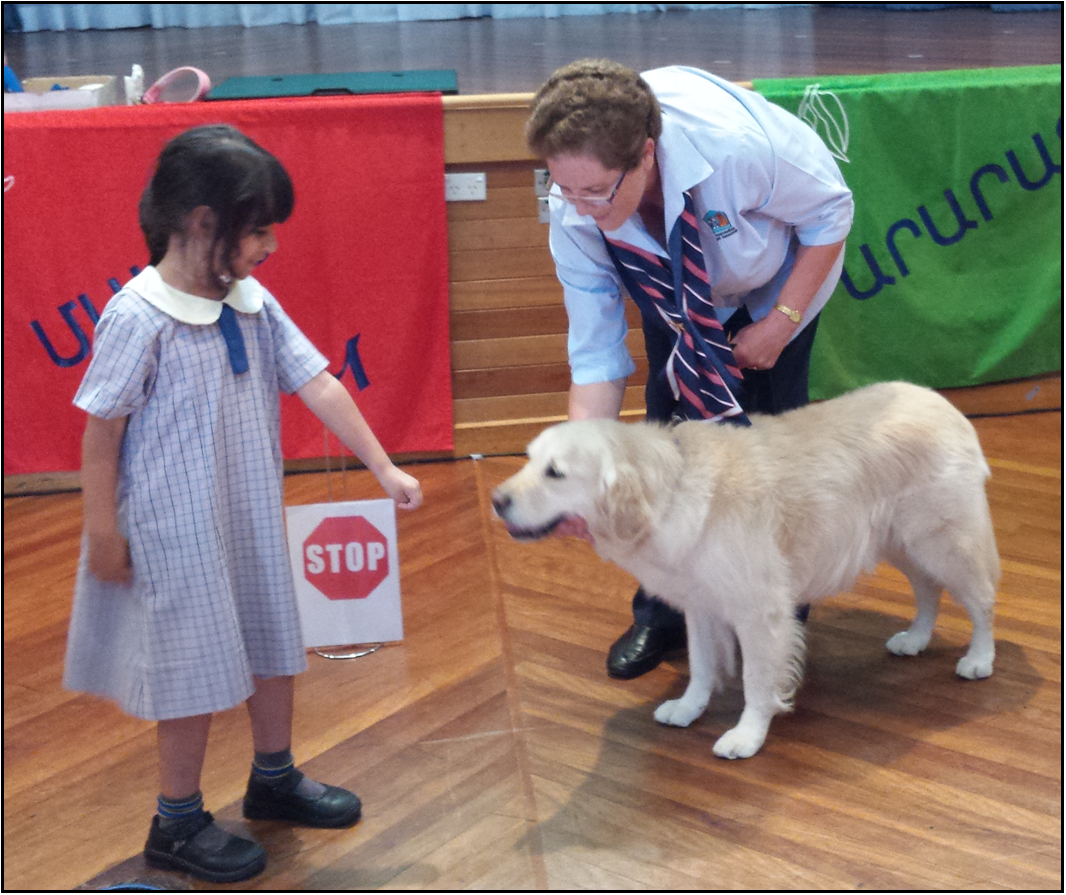 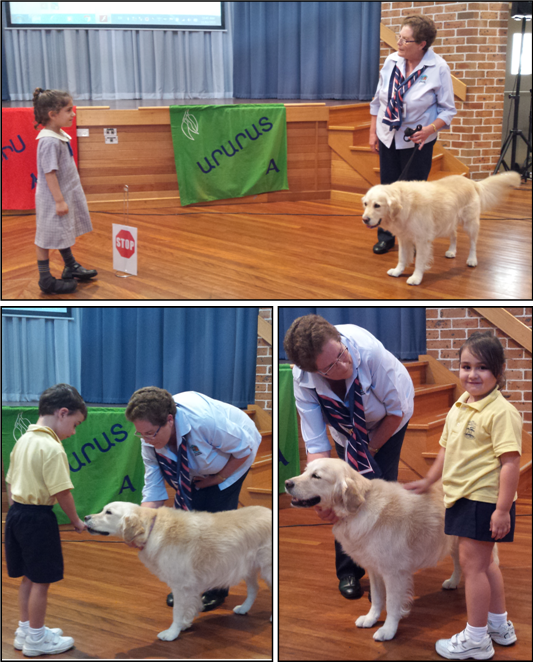