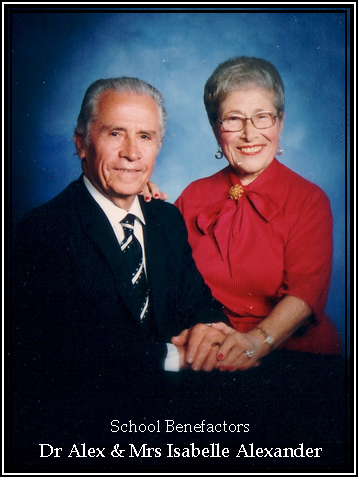 25 years ago, as a result of many years of hard and dedicated work by members of the Armenian
General Benevolent Union Sydney Chapter, AGBU Alexander Primary School opened its doors for the first time to the Armenian community of Sydney. During the initial year, classes were located at Belrose public school, as the school ground was still being built thanks to our beloved benefactors Dr Alex and Mrs Isabelle Alexander. Their vision to preserve the Armenian language, culture and identity was made possible thanks to the support of the AGBU Central Board and the great generosity of its Honorary Life President Mr Alex Manoogian.

Today, as we welcome students for the 25th time, we reflect on our past achievements, successes and challenges and look forward with renewed commitment to our service to the community. Service that has stayed focused on its mission and proudly produced many fine, well rounded and well educated youngsters. It is even more gratifying to see these graduates, now as young adults, are taking an active role in the community. In the true sense of our motto ‘To Grow & Serve’ - they have grown and are ready to serve the larger Australian community as well as being ambassadors for their Armenian heritage.

Over the past quarter of a century AGBU Alexander Primary School has set the foundation in educating future leaders. This is not only evident in the community but also in the current School Board where two of its graduates have already taken leadership and are ready to direct their school to the next generation. With your continued support and dedication, their task and that of the School Board, is to ensure that this magnificent educational institution is able to serve the needs of the Armenian community for the next 25 years.

On behalf of everyone, I would like to wish them the best of success in their endeavours, as we get ready in

Celebrating 25 Years of Academic Excellence!
* * *
This year also marks the 100th Anniversary of the Armenian Genocide. The first genocide of the 20th Century. The Australian-Armenian community will be holding special events during the year, coordinated by the ‘Armenian Genocide Centenary Commemoration Committee of Australia’. Alexander School will join in the commemoration to honour the fallen martyrs of Armenia and celebrate our triumph as a nation of survivors, by renewing our demands with vigilance towards the full recognition by the international community and by the successor state of the perpetrators, Turkey. As a community and as Armenians, it is our duty to immortalise our fallen brothers and sisters, and achieve justice and recognition to end denial and historical distortion.